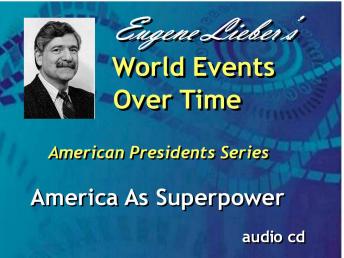 40. Ronald Reagan. Image versus substance. Reagan is elected 1980. Controversy of the Iranian hostages. The emerging dominance of the Republican Party is seen as a backlash against improved civil rights for African-Americans. Earlier policy of diminished social safety net while California governor. (08.00.00) = Deficit spending. TThe economic factor includes huge increase in the military budget plus a huge tax cut. This is a windfall for the upper class rich but creates huge deficit spending. This is the “trickle-down” theory of economics and the economy does not benefit. Cuts are not made to the military but to domestic spending including aid to education and aid to the states. Deregulation promotes a free market. OSHA budget is cut and business has a free hand. The subsequent savings & loan scandal becomes a taxpayer burden and the offending banks are not punished. President Reagan breaks the air traffic controllers' union. (13.17.000) = There is a Political Shift to the Right There is a Republican shift to the right and the Democrats go along. Liberalism becomes a dirty word. This recasting of political orientation has profound implications in the 1980s and beyond. (18.43.00) = U.S. Foreign Policy supports murderous dictators in Latin America. Reagan takes credit for ending the Cold War citing Russia's burden of matching U.S. military spending. In reality the Soviet Union crumbled of its own from its own weakness. Gorbachev has a significant but unintentional role in bringing down Communism. Scientific opinion is unanimous that Star Wars defense missile system can't work. (20.56.00) = Image versus substance. Reagan's administration poses the issue of delegation of authority vs abdication. Reagan is reelected in 1984 by a landslide, raising the question of image vs substance. He is called the “Teflon President” because scandals in his administration do not stick to him. (25.28.00) = Reagan's Legacy Later he is diagnosed with Alzheimer disease. He is genial but there is a question of his being a deep thinker. His legacy includes the economic impact of deficit spending and the emergence of U.S. as the single superpower. (28.51.00) = 41. George Bush, the Elder is elected 1988. He had been critical of Reagan's advisors' “voodoo economics.” He comes from an oil family. He had been a moderate Republican but now shifts to Reagan's outlook to succeed. He plays the race card. He casts “liberal” as a dirty word during election. He carries on Reagan's policies. He is a one-term president. It is belief vs popularity, not lack of charisma. His promise of no new taxes is flawed because he has to raise taxes to deal with the deficit. (36.13.00) = 42. William Clinton. Charismatic, he is elected in 1992. He is a centrist but accepts the rightward national political turn. He and wife, Hillary, are under constant attack from the right from the start. His stab at a moderate national health insurance is defeated. Problems in his personal life lead to impeachment but he is acquitted. Despite this scandal his public poll ratings improve. He wins reelection in 1996. It is too early to evaluate his legacy. (52.44.15) = 43. George W. Bush, the Younger. Right wing agenda. Wins a highly disputed election in 2000 against Al Gore. Having little background, there is the question of a leader who has his own principles and makes his own decisions or is dependent on advisors. He pursues a strong right wing agenda. His rightward turn culminates in a Christian coalition, a virtual divine right monarchy, raising the issue of the separation of church and state. (58.05.27) = His domestic agenda shifts to the right. Energy policy is made by energy companies. Non-compete contracts by insurance companies are allowed. The environmental movement is under attack. Federal agencies see reversals of purpose. Policy making is influenced by Vice President Dick Cheney and Karl Rove. (1.00.09.10) = Legacy. Foreign policy is based on the U.S. as the single superpower. A neo-conservative movement applies U.S. power all over the world. The current wars are too recent to analyze. The issue of truth vs lies reemerges as an echo of the Vietnam War. There is great concern about the human and financial costs involved in the wars. There are limits to power and the decline of power when it reaches too far. There are free market economy issues and the use of overseas labor. The world is in flux. There is the rise of China and India as world powers.