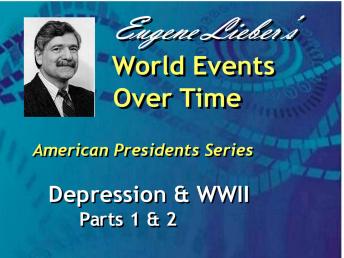 31. Herbert Hoover. He is elected in 1928. He is opposed to the League of Nations, believes American power should be projected by economic and political forces. During the Depression he believes government should keep its hands off, calls for volunteerism, advocates business to help from the top down. (26.32.00) = 32. Franklyn Delano Roosevelt Early career. A distant cousin of Teddy Roosevelt, he comes from NY old wealth carrying a sense of public obligation. His wife, Eleanor, lacks early self-confidence. Marital alienation contributes to her independence and her special role in FDR's career. FDR's is afflicted with polio in the early 1920s, makes a great effort to overcome its effects, and reenters politics (37.05.00) = FDR elected in November,1932 but inauguration is not until March, 1933. In a depression the country drifts dangerously during this interval when no government action will be able to be taken. A run on the banks begins amid increasing financial panic. Inauguration day arrives. FDR's attempts to calm the country. His famous inaugural speech, "We have nothing to fear but fear itself' delivered in his trademark firm reassuring voice. A series of radio fireside chats follow. He announces a new banking law and pronounces the banks safe. The bank crisis is turned around more by FDR's confidence and reassuring manner than change in policy. There is a question of whether his philosophy is that of a pragmatist or an opportunist. (48.28.00) = Farm Measures Fail. Major reform legislation in the first 100 days intended to aid small business and farmers hurt by prolonged drought is not effective. Being paid to restrict crops could not be monitored. The large farms benefited but the small farmers and sharecroppers continued to suffer.

Franklyn Delano Roosevelt (continued). 3 important acts passed in 1935 These are needed 2 years earlier but FDR put the brakes trying to win over business which does not trust him. The National Labor Relations Act (Wagner Act) legitimatizes labor unions. The Social Security Act pensions for retirees where workers and employers each paid half of the premium. The Wealth Tax Act (Soak the Rich Act) taxes income progressively. These are passed before the elections and FDR wins a second term in a landslide (05.35.00) = Packing the Court. FDR attempts to control the Supreme Court by adding a number of justices to the existing 9, but rejected by Congress. Later he is able to replace justices who die out with his own choices. (07.26.00) = Later Relief Agencies That Work. FDR later succeeds by going further, creating relief agencies that work. These include the WPA, PWA, and CCC, which created, respectively, jobs for skilled, unskilled, and creative people, and the Fair Labor Board which set work standards. This reflects the Keynes view of jobs as the answer to the causes of economic depression, and is the opposite from the "trickle-down" view. (21.31.003) = U.S. Isolationism. Gathering of war clouds caused by fascism, which the U.S. responses to with acceptance. Hitler appeals to the West for support to bolster his fight against communism. The 1936 Spanish Civil War is doomed by Western neutrality, a missed moral opportunity to stop fascism. The mentality of most Americans is disillusionment after World War I. There is the role of Germany, the American Bund, and Lindberg to foster American support for Hitler. There is a growing conflict with Japan for dominance in Asia, especially in China. There is the emerging Axis Alliance vision of the carving up of the world. Western fears underlie the appeasement of Germany. (1.00.18.00) = WW II Begins.The August 1939 non-aggression pact between German and Russia has its rationale. The German blitzkrieg leaves only England to face German military might. Still neutral, the U.S. begins Lend-Lease aid to England.. 1.03.06.00) = Pearl Harbor The Japanese attack on Pearl Harbor and the controversy over FDR's role contrasts one theory that FDR let the attack happen to unite Americans to support the war against the theory of his "blundering" not his "calculation." There is the issue of which enemy is more dangerous, Germany or Japan, and why the military advisors believe Germany is the more dangerous. (1.12.36.00) = The Second Front and alternative actions present complex strategic issues. There is the question of Stalingrad's role in shortening the war. The question that an earlier second front might have greatly reduced the Holocaust. There are implications of the Stalingrad victory for real politic and post-war relations. (1.38.03.00) = FDR wins 3rd & 4th terms. FDR gets Russia's promise to attack Japan. The controversy of the use of the atomic bomb is explored. The fact that only the start of World War II ends the Depression has profound meaning for that time, and for all time of history from that day to this, pointing to the need for a war economy.