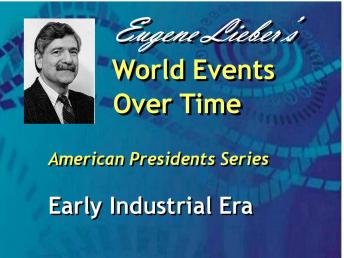 19. Rutherford B. Hayes. His party steals 1876 election from Tilden by manipulating electoral votes. He ends Reconstruction and federal troops are withdrawn from South. Poor white & ex-slave small farmers become sharecroppers, a status considered worse than slavery. (08.18.00) = 20. James A. Garfield. 21. Chester A. Arthur, 22. Grover Cleveland. 23. Benjamin Harrison. All are mediocre Presidents, overshadowed by the economic giants of the times. (18.27.00) = 24. Cleveland 2nd term. He breaks Pullman strike with troops after the governor refuses illegally intervene. (24.23.00) = 25. William McKinley. He annexes the Philippines after Spanish-American War, leading to two years of brutal guerrilla war. He is assassinated by anarchist.