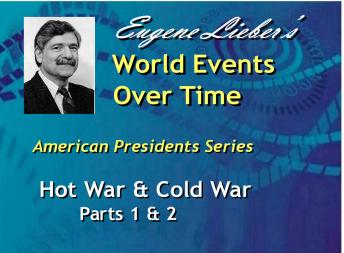 35. John F. Kennedy. Elected in 1960 in a close race where the role of TV image is a factor. He is charismatic. He clears the air of the issue of him being a Catholic by reaffirming the separation of church and state. He creates the New Frontier image but reality is pragmatic with civil rights. An anti-discrimination in public housing bill is signed but applies only to housing to be built. His administration tries to block civil rights marches and demonstrations. JFK's view at the time is that communism is a Russian monolith, and that Vietnam is a threat to the U.S.. He sends troops in 1961, beginning a self-commitment. When popular demonstrations erupt at home, he misses the chance to withdraw and save face. JFK is assassinated in 1963. If he had lived, Vietnam would have continued. His legacy is his charisma inspires the younger generation in public service. (25.32.00) = 36. Lyndon B. Johnson. LBJ completes JFK's term. He is from Texas, a segregated state. He has a strong personality with unsavory aspects. He identifies with FDR's New Deal traditions. The civil rights movement is in full swing and he pushes important civil rights legislation affecting African-Americans, women, and other minorities. This includes the War on Poverty and education. His important legacy is the Great Society laws. He is reelected in 1964 during the Vietnam War. The Tonkin Bay hoax gives him great authority for a major escalation of the war eventually reaching 500,000 troops. Domestic programs are cut. When increased hope is thwarted domestic uprisings result. The 1968 Tet offensive dooms the war effort as lost, and leads to low public confidence in the president. LBJ drops out of the reelection race. (40.22.00) = 37. Richard M. Nixon. He returns from political defeat to win the 1968 election, and is reelected in 1972. He opens the door to China for economic reasons. The Vietnam War is intensified and then ended. In Latin America he supports the overthrowing of governments not to our liking. Domestically he initiates reforms. He is a paranoid president believing he is above the law and provokes a constitutional crisis. (1.13.03.12) = 38. Gerald Ford As vice president he becomes president after Nixon resigns. He is genial but has an image of bumbler. He loses the 1976 election. . (1.18.29.03) = 39. Jimmy Carter. Carter, an anti-segregationist Governor of Georgia, is elected in 1976 and serves only 1 term. The Iranian Islamic revolution undercuts his reelection bid when he is unable to free American hostages.