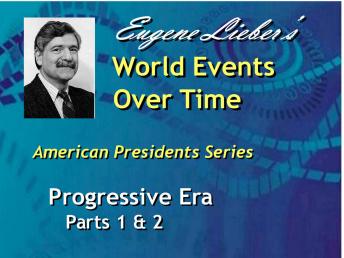 The political scandals of LBJ and Nixon. The GOP shift to the right.
The erosion of liberalism of Democrats in power a long time. Traditional values versus civil rights, women's rights, etc. The GOP Southern Strategy addresses the resentment of Southern whites to civil rights changes leads to the rebirth of the GOP majority. Republican favoritism toward
. (40.28.22) = . His diplomatic style is aggressive, using "Dollar Diplomacy" and "Gunboat Diplomacy" in his drive for the Panama Canal. . (51.09.02) = 27. William Howard Taft William Howard Taft. A one-term Republican but he launches more anti-trust suits than his predecessor, and signs an amendment which ends the practice of rampant election fraud in Senate elections.

28. Woodrow Wilson. A Democrat, is elected in 1912. He believes that anyone who opposes him on any issue is morally evil. Wilson is reelected in 1916 on the theme of "He kept us out of war," but leads the U.S. into the war in April, 1917. In Wilson's world view, the League of Nations is to be not an idealistic utopia but a tool for the U.S. to dominate the world. (30.38.00) = U.S. neutrality in WWI. . Wilson declares U.S. neutrality at start of World War One in Europe in 1914. U.S. expectations of increased trade with both sides are thwarted by English surface naval power which blocks German ports. Germany counters with the U-boat to attack Allied shipping. (45.43.00) = U.S. enters WWI. The official reason is "the freedom of the seas." On a deeper level there is anticipation of significant economic gain, and Wilson's personality which sees Germany as a moral evil. (54.40.19) = Should the U.S. Have Stayed Out of WWI? There is the practical judgment of whether U.S. could have stayed out of the war, and the moral judgment of whether the U.S. should have stayed out, both with significant implications for whether World War Two would have occurred. (58.18.0) = Loss of Civil Liberties. During the war there is domestic terror and mass hysteria, with Wilson leading the way with curtailment of U.S. civil liberties (1.04.51.00) = The Peace Treaty. Intent mainly for revenge on Germany, the Allies brush aside Wilson's 14 points. . U.S. disillusion sets in after the Senate rejects the League of Nations when Wilson refuses to compromise with Senate modifications. (1.25.38.00) = Wilson's legacy. The political debate since WWI and into the present and future is how to assert America's will on the world-- by military force or by economic and political pressure. America is superpower. The war diverts reform (1.31.37.00) = 29. Warren G. Harding. Elected in 1920 in Republican landslide, He is considered a failure as President, His administration is riddled with cronyism and scandals (Teapot Dome), but he also had some capable cabinet members. Harding dies in office. (1.36.45.00) = 30. Calvin Coolidge. He is known for breaking of the police strike. He seems to suit the times, is popular, and easily wins reelection in 1924. He blocks help to farmers because he sees them as inconsequential.