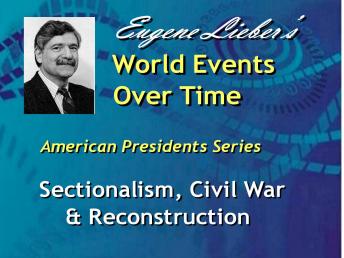 11. James Knox Polk. He achieves very significant expansion of American territory. (11.07.00) = 12. Zachary Taylor. He is a Southerner, a Mexican War hero, wins 1848 election. He attempts to accommodation North-South sectionalism. He dies 2 years into his term. (12.38.00) = 13. Millard Fillmore. Completes Zachary Taylor's term, is a passive President, a pro-slavery Northerner. (13.28.00) = 14. Franklin Pierce. A Democrat, elected in 1852, he does little to offend Southern slaveholders in the crucial pre-Civil War decade. (14.44.00) = 15. James Buchanan. He also avoids offending Southern slaveholders as the country heads for civil war. (15.27.00) = 16. Abraham Lincoln. Deals with blacks as equals on a one-on-one basis, but as an ambitious politician, tells audiences what they want to hear. His election in 1860 begins secession crisis. (30.57.00) = Civil War. Lincoln responds to war crisis with strong measures, assuming dictatorial methods. His Emancipation Proclamation of 1863 frees slaves in the Confederacy but not others. He allows blacks to serve in Union Army. Total war by Sherman and Grant leads to victory but also huge slaughter on both sides. He imposes a generous plan for defeated South. He lacks popularity until after his assassination. (53.47.00) = 17. Andrew Jackson. The controversy of Reconstruction and the future of ex-slaves is over land for poor whites and ex-slaves. His political and economic but not moral motives to keep his party in power create conflict with North. (1.05.48.00) = 18. Ulysses S. Grant. He is considered a failure, lacking the confidence shown on the battlefield. There are scandals associated with his office. His notable memoirs are assisted by Mark Twain.