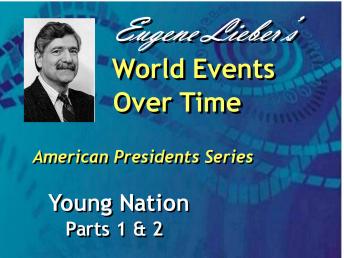 1. George Washington, 1788-1796, 2 terms. He is charismatic yet personally aloof. He wages a guerilla warfare, outlasts the British to victory. He rejects royal image. He supports Hamilton's controversial policies which put the U.S. on firm financial footing. He opposes entangling alliances, a cornerstone of foreign policy for over 100 years. He frees most of his slaves at his death. (19.30.00) = 2. John Adams, 1796-1800. He lacks charisma but is a brilliant original political thinker. He defends British soldiers who are on trial for the Boston Massacre. He is a one-term president. The passage of the Alien & Sedition Act is a low point. His resistance to popular war fever against France avoids disaster and is the high point.. (31.44.00) = 3. Thomas Jefferson, 1800-1816, 2 terms. He fights to free slaves in Colonial Virginia and Northwest Territories, but does not free his own slaves at his death. He writes the Declaration of Independence. He argues against a strong federal government, but uses federal power when necessary. He backs the States Rights Doctrine that states can reject federal law.