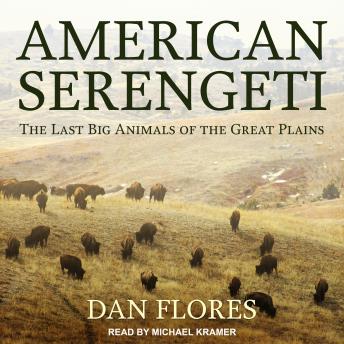 American Serengeti: The Last Big Animals of the Great Plains

America's Great Plains once possessed one of the grandest wildlife spectacles of the world, equaled only by such places as the Serengeti, the Masai Mara, or the veld of South Africa. Pronghorn antelope, gray wolves, bison, coyotes, wild horses, and grizzly bears: less than two hundred years ago these creatures existed in such abundance that John James Audubon was moved to write, "it is impossible to describe or even conceive the vast multitudes of these animals."

In a work that is at once a lyrical evocation of that lost splendor and a detailed natural history of these charismatic species of the historic Great Plains, veteran naturalist and outdoorsman Dan Flores draws a vivid portrait of each of these animals in their glory-and tells the harrowing story of what happened to them at the hands of market hunters and ranchers, and ultimately, a federal killing program in the nineteenth and twentieth centuries.

American Serengeti: The Last Big Animals of the Great Plains