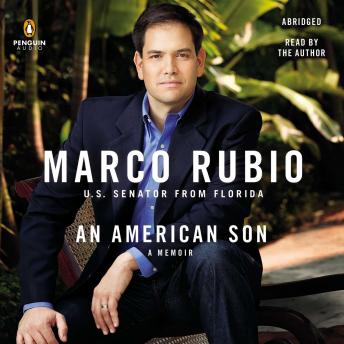 An American Son: A Memoir

Few politicians have risen to national prominence as quickly as Marco Rubio. Here is the full story of his unlikely journey.

Florida Senator Marco Rubio electrified the 2012 Republican National Con­vention by telling the story of his parents, who were struggling immigrants from Cuba. They embraced their new country and taught their children to appreciate its unique opportunities. Every sacrifice they made over the years, as they worked hard at blue-collar jobs in Miami and Las Vegas, was for their children.

Young Marco grew up dreaming about football, not politics. In this fas­cinating memoir, he reveals how he ended up running for the West Miami City Commission, and then the Florida House of Representatives. In just six years he rose to Speaker of the Florida House. He then won his U.S. Senate campaign as an extreme long shot.

Now Rubio speaks on the national stage about the better future that’s possible if we return to our founding principles. In that vision, as in his fam­ily’s story, Rubio proves that the American Dream is still alive for those who pursue it.