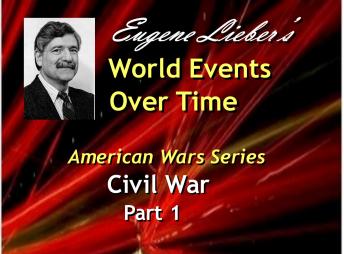 The Cotton Gin Changes Slavery as necessary evil to positive good in the South. Why slavery is not established in the North, unrelated to moral issues (4.18.00) = Sectionalism of North and South. . Role of high tariffs on English goods and concept of states' rights. (8.48.00) = Clash of Ways of Life. Dominance of South's planter class. North's family farmers and evolving modernity in the rise of manufacturing. (12.54.00) = Division Between Slave States and Free States. The Missouri Compromise of 1820. The Compromise of 1850. The Washington, D.C. slave trade. The Underground Railroad. The Fugitive Slave Act and enforcement (21.24.00) = Drifting Toward Civil War. Failure of various attempts of compromise. (26.17.00) = Dred Scott Decision of 1856. Supports concept of slavery, negates the Great Compromise of 1820, opening up all western territory to slavery. (29.40.009) = The Republican Party, a Northern, anti-Southern, anti-slavery party, emerges in 1854, supported by disparate groups for economic , political, racist, and moral reasons. It's candidate, Abraham Lincoln is elected president in 1869, totally changing the political landscape. (37,31.00) = Civil War Begins. The South secedes in 1860 with Lincoln's election, despite the long history of the South dominating the presidency. (41.41.27) = Was the Civil War Avoidable? Slavery is a dying institution. The impracticality of expanding slavery in the West. (43.24.00) = The Civil War Was Inevitable. Slave owners want to preserve their way of life, impracticality of slavery ignored. (50.25.00) = Southern Advantages. South had better generals, was a gun culture, know what they are fighting for, a way of life also aspired to by poor whites. (52.29.00) = Southern Disadvantages. Lack of finances, lack of railroads, ineffective leadership, lack of unity with belief in states' rights, cotton and tobacco prevent an independent food supply, the hostility of the slaves, and the shortage of manpower.