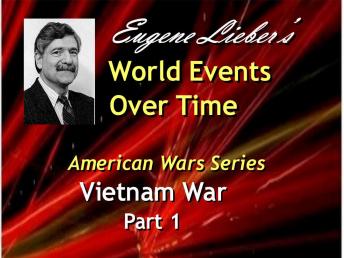 Vietnam's Hope to be Free From France Peacefully is Denied. Vietnam's long history of struggle against foreign control, including being a part of France's colonial empire and its need for rubber, a major resource in the industrial era. Hi-Chi-Minh sees Pres. Wilson's self-determination principle in the WWI peace treaty as a hope for Vietnam's independence, but is denied. (4.41.00) = Guerilla war against France in 1930s led by Ho Chi Minh who is not a puppet of Russia. He calls himself a communist as a foil to French capitalism, but is a Vietnamese nationalist, part of his country's history and not a puppet of Russia. This is needed to understand events during the Cold War after WW II. (9.1.00) = Guerilla war against the Japanese who drive out French during WW II. The close cooperation with the U.S. against the common enemy. After Japan surrenders in 1945, Ho Chi Minh declares Vietnamese independence in the spirit of the American Declaration of Independence. (12.16.00) = The Vietnamese must fight against the French all over again. Now in the Cold War, America sees this as an extension of its perceived threat from communist Russia. The U.S. rejects Vietnamese independence, and provides material support for France's reoccupation of Vietnam. France becomes a U.S. surrogate to stop the spread of communism in Asia. (14.55.00) = Could the U.S. have accepted an independent Vietnam calling itself communist? The example of the U.S. support after WW II of the independent communist country of Yugoslavia led by Tito. The U.S. fails to treat Vietnam the same way, so from 1946 until 1954, 8 years of brutal bloody warfare follows.. (17.55.00) = Geneva Accord of1955. . France withdraws from Vietnam after a major military defeat at Dien Bien Phu, including setting a temporary dividing line at 17th parallel to help French troops to withdraw. U.S. does not sign but promises to abide by the accord (20.55.00) = The French are out, the Americans are in. The U.S. creates a fiction of a North Vietnam and a South Vietnam. Diem chosen to head South Vietnam, with Saigon as its capital, under U.S. control and military support. Elections were stopped, violating the Geneva Accord, to prevent Ho Che Minh from winning. (27.35.00) = Pres. Eisenhower refuses to send American troops into Vietnam. . Diem corruption results in many American arms winding up in guerilla hands. (29.08.00) = JFK's election in 1960 is new turning point. The American foreign policy of containment in the Cold War, with the threat of massive retaliation with nuclear weapons. Ignoring Eisenhower's policy, JFK sends American troops ("advisors") in 1961, believing containment is involved, instead of a continued nationalist war for independence (35.43.00) = Missed opportunity for America to withdraw from Vietnam with honor.1962 massive demonstrations led by Buddhist monks, including self-immolation, against unpopular dictatorial and corrupt Diem government. America remains, allowing a military overthrow of Diem who is replaced by a series of generals all of whom had fought on the French side. Myth of JFK getting us out of Vietnam if he had lived. (41.57.00) = The Tonkin Bay Resolution of 1964.Lyndon Johnson is now president. He asks congress for broad war powers to deal with a reported attack on American warships in Tonkin Bay, later seen as a possible setup by the U.s Johnson wins reelection in 1964 as the peace candidate. Then there is a major escalation of American troops in Vietnam, which already had been planned. (43.58.00) = The brutal resourcefulness of the guerillas. Land mines. Booby trapped dead bodies. Sharpened stakes in hidden pits. (46.00.00) = American high-tech tactics. Saturation bombing for 10 years. Defoliation to destroy food supply and ground cover. Chemical accidently damages U.S. troops.

Horror of weapons used against the guerillas. Agent Orange used as a defoliant accidently harms American servicemen causing serious chronic illness, even with birth damage to some offspring. Imagine the damage when used deliberately against the Vietnamese (2.46.00) = Other American insidious weapons. Mercury in streams and rivers to poison fish, a staple of Vietnamese diet. Specialized anti-personnel weapons. Napalm, a highly explosive jellied petroleum product which clings to human skin. Various torture techniques. (8.32.00) = Harsh psychological pressures. Guerilla hit-and-run tactics. Uncertainty of whether civilians are the enemy biding their time. Debilitating physical conditions of the jungle. Witnessing battlefield damage suffered by buddies. Anxiety and fear anticipating one's own wounding or death at any moment. (15.02.00) = Impact of war on troops. The body count as measure of victory. Promotions and respite from combat depend on it. Continuous sense of fear. Role of fragging. The use of drugs. Ongoing intoxication. (17.00.00) = My Lai massacre. Loss of humanity in this war. (18.57.00) = Tet offensive of 1968. A devastating psychological defeat for America, although a technical military victory. A long term effect on the American electorate. Lyndon Johnson declines to run for president in 1968 (24.02.00) = Vietnamization. Richard Nixon elected president in 1968. Campaigns claiming a secret way to end the war. In office, he reduces American troops but intensifies the air attacks, expanding the war. (27.00.00) = Cambodia. Bordering Vietnam and neutral, the U.S. overthrows its prince and installs a semi-military leader. With the approval of security advisor, Henry Kissinger, the U.S. bombs it mercilessly, setting the stage for the later rise of the Khmer Rouge which inflicts a killing field horror on Cambodians. (30.08.00) = Nixon Reelected in 1972 with the promise that peace is at hand. After election, the war continues and Hanoi is carpet bombed on Christmas. Troop reduction and bombing continue for another 3 years, until Congress withholds funding. When the bombing ends the South Korean army soon collapses. The scramble to evacuate completely and a sorry end to this 10 year war. (35.04.00) = Why Vietnam? Seen as the logical extreme consequence of the Cold War atmosphere and the hysteria it created. Dan Ellsworth and the hidden motivations revealed in the Pentagon Papers. (39.42.00) = Destructive effect on returning veterans. Post Traumatic Stress Syndrome. Broken families. Drug abuse. Alcoholism. Law breaking. Generational splits in families. (43.26.00) = Lessons learned. . Censor news in future wars. American public will not accept high U.S. casualties. To minimize casualties intensify the bombing from the air. The war's major impact leaves the world greatly changed.