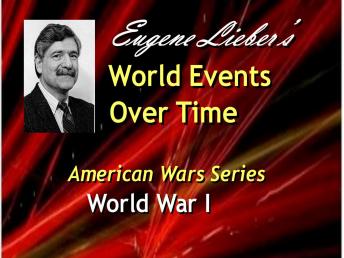 Modern imperialism. Modern imperialism from 1850s: industrial needs for markets and materials. Germany on a collision course with industrial leader, England. (4.06.00 = The Alliances. Why England, France & Russia ally against the German, Austrian, and Italian alliance. The extreme arms race before outbreak of war. (9.20.00) = The Trigger. Crisis in 1914 when a Serbian terrorist assassinates the Archduke of Austria-Hungary in Sarajevo drawing the alliances into conflict. (13.02.00) = The Explosion. How the 2 alliances interact to this crisis to become embroiled in World War. (19.00.00) = The Welcoming. Each country involved eagerly welcomes this war. (22.13.00) = Trench Warfare. Germany is not able to win victory quickly. Trench warfare begins. (26.04.00) = Role of Class. War of attrition, the horror of the slaughter. On both sides, upper class officers view soldiers whose lower class role is to die in battle for the country. (34.05.00) = End of the Old World. After 4 years of battlefield carnage, the world is never the same. (39.00.00) = American Neutrality. The sinking of the Lusitania and President Wilson's arrogant actions.