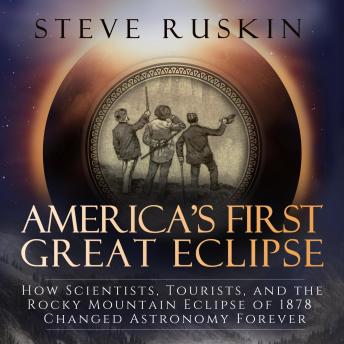 America's First Great Eclipse takes listeners on a thrilling historical journey, revealing that 19th-century Americans were just as excited about a total solar eclipse as we are today...and, like us, were willing to travel thousands of miles to see it.

The total solar eclipse of August 21, 2017 was called the Great American Eclipse, and the upcoming eclipse of April 8, 2024 is being called the Great North American Eclipse. But these were not the first eclipses to earn such titles. In the summer of 1878, when the American West was still wild, hundreds of astronomers and thousands of tourists traveled by train to Wyoming, Colorado, and Texas to witness America's first 'Great Eclipse'.

America's First Great Eclipse tells the story of a country, and its scientists, on the brink of a new era. Near the end of the 19th century, when the United States was barely a hundred years old, American astronomers were taking the lead in a science that Europeans had dominated for centuries. Scientists like Samuel Langley, Henry Draper, Maria Mitchell, and even the inventor Thomas Edison were putting America at the forefront of what was being called the 'new astronomy'.

On July 29, 1878, having braved treacherous storms, debilitating altitude sickness, and the threat of Indian attacks, they joined thousands of east-coast tourists and Western pioneers as they spread out across the Great Plains and climbed to the top of 14,000-foot Pikes Peak, all to glimpse one of nature's grandest spectacles: a total solar eclipse.