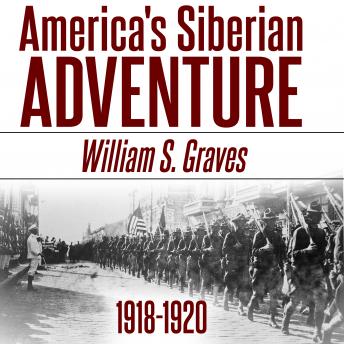 This left the allied forces with a number of difficulties and so they decided to intervene in the Civil War for three reasons:
Firstly, to prevent Allied war material stockpiles in Russia from falling into German or Bolshevik hands.
Secondly, to rescue the 50,000 troops in the Czechoslovakian Legion who were stranded along the Trans-Siberian Railroad.
And thirdly, to resurrect the Eastern Front by installing a White-backed government.
In July 1918, against the advice of the Department of War, Woodrow Wilson agreed to send 5,000 troops as the American North Russia Expeditionary Force and 10,000 troops as the American Expeditionary Force Siberia, the second of which was commanded by William S. Graves.
Within the book he covers the international relations between the major intervening powers, the incredibly complex nature of the Russian Revolution and its subsequent civil war, the way that the allied forces intervened in the conflict, and the eventual outcome of the war.
America's Siberian Adventure, 1918-1920 is a brilliant book for anyone interested in the military history of the United States and the history of one of its less well-known conflicts.
"Its value, which is considerable, rests upon the extensive use made by General Graves of his reports to the war department, the portrayal of the methods used in carrying out his instructions, the disclosure of new material relative to the conflict of policy between the departments of state and of war, and his testimony on the ruthless regime of Kolchak, Semeonoff, and Kalmikoff." Paul H. Clyde, Journal of American History
Major General William S. Graves was a United States Army Major General. He commanded American forces in Siberia during the Siberian Expedition, part of the Allied Intervention in Russia. His book America's Siberian Adventure 1918-20 was first published in 1931 and he passed away in 1940.