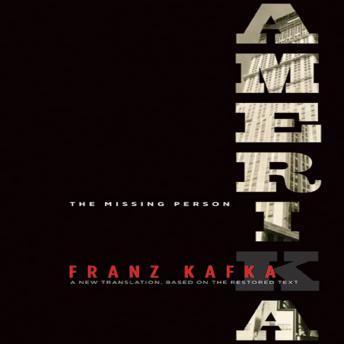 Amerika: A New Translation by Mark Harman Based on the Restored Text

A Brilliant new translation of the great writer's least Kafkaesque novel, based on a German-language text that was produced by a team of international scholars and that is more faithful to Kafka's original manuscript than anything we have had before.

With the same expert balance of precision and nuance that marked his translation of Kafka's The Castle, the award-winning translator Mark Harman now restores the humor and particularity of language to Amerika. Here is the story of seventeen-year-old Karl Rossman, who, following a scandal involving a housemaid, is banished by his parents to America. With unquenchable optimism and in the company of two comic-sinister companions, he throws himself into misadventure after misadventure, eventually landing in Oklahoma, where a career in the theater beckons.

Like much of Kafka's work, Amerika remained unfinished at the time of his death. Though we can never know how Kafka planned to end the novel, Mark Harman's superb translation allows us to appreciate as closely as possible, what Kafka did commit to the page.

Amerika: A New Translation by Mark Harman Based on the Restored Text