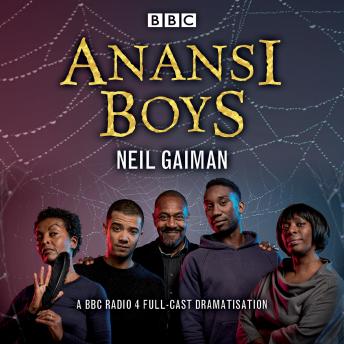 When his father dies, Fat Charlie Nancy discovers that not only was the late Mr Nancy actually the god Anansi, but that he also has a long-lost brother, Spider, who is everything Fat Charlie is not. When Spider begins to take over Fat Charlie's life, flat and even his fiancée Rosie, Fat Charlie is forced to make a pact that lands him in trouble with the gods themselves...

Anansi Boys is a story of love, laughter, music and murder, old gods and new tricks that takes Fat Charlie from his home in South London to Florida, the Caribbean, and the very Beginning of the World itself. Or the End of the World. Depending on which direction you’re coming from.

Jacob Anderson stars as Charlie, and he has written and performed a specially commissioned song – ‘Charlie's Song’ – which forms part of the magical fabric of Anansi Boys.

Dramatised for Radio 4 by the award-winning Dirk Maggs (Neverwhere, Good Omens, The Hitchhiker’s Guide to the Galaxy), the stellar cast of this series also includes Joseph Marcell, Lenny Henry, Nathan Stewart-Jarrett, Adjoa Andoh,Julie Hesmondhalgh and Julian Rhind-Tutt, as well as a cameo appearance from Neil Gaiman himself.