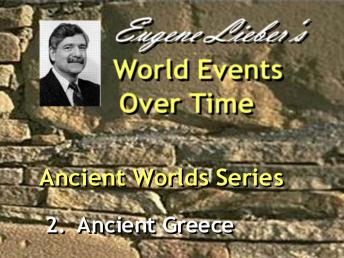 Dark Ages-1,200-800 B.C. . Epic poetry of Homer, the Iliad and the Odyssey depicting frequent wars and polytheism. Gods are varied and reflect human personalities. Concept of afterlife emphasizes life on earth. (6.31.00) = Archaic Period -800-500 B.C. Series of walled city-state centered in agricultural area. Shared ethnicity, language, and religion but are separate identities, independent of Athens. (10.53.00) = Tyranny. The term is neutral in these times. The seizing of power is favorable or unfavorable depending on which class seizes power in terms of your own class.. (12.41.00) = Athens. . Class oriented. The nobles an inherited class, and the peasants do the labor. Salon's Code of 594 B.C. aims to reduce threat of rebellion by the peasants, but unexpectedly leads to more wars as an unexpected consequence. (17.53.00) = Slavery. Morality of slavery is not questioned. Slavery is basis for ancient Greek economy. Slaves also used as household servants. Slaves make up ¼ of Athens' population of 1 million. (21.12.00) = Ideal democracy, the politics of Athens. The citizens make the laws. Lawmakers are all who show up for the public assembly every 9 days. System also ensures a rapid mix and change of the 500 council members who prepare for the assemblies, and 10 generals permanently chosen. (25.57.00) = Dark side Women, minors, slave, and foreign born cannot be citizens, leaving only about 40,000 of 1,000,000. Most peasants do not have leisure time to participate. Nobles are educated in the all-important persuasive skills of oratory, lacking for peasants, who also are subject to political pressures from the noble on whom they are dependent. (29.20.00) = Sparta, the Nazis of Greece. Sparta sees culture as a threat to their closed society which is based on complete obedience to authority and military ability. Those defeated in war are made slaves, contrary to unwritten Greek law. (35.48.00) = The Peloponnesian War, 441-421 B.C., considered the first world war. Led by Sparta, it drags on, is ruinous, with revolts, fails to unify Greece. (39.37.00) = Macedonia later conquers Greece, one city-state at a time. This does not unify Greece. Greek democracy is possible only in a small city-state, when Athens is conquered, reemerges 2,000 years later in the American Revolution. (41.54.00) = Socrates. Athenian philosophy. Before philosophy, the gods govern. Philosophy considers humans the center of things. They are rational, must know themselves. Socratic method is the give-and-take of questioning. This threatens authority. Socrates is found guilty of treason, chooses suicide over exile. (46.32.00) = Plato. Promotes the basic inequality of humans. He rejects uncertainty, believes that certainty can be created in one's mind and then applied to the physical world, and then applied to the physical world. (48.49.00) = Aristotle. The experimental method. The empirical method of starting with experience in the outside world, and then making conclusions in the mind, the opposite of what Plato was doing. Much of modern science comes out of this approach. (49.55.00) = Other contributions to science. Democritus conceptualized that all matter is made of particles of atoms, the origin of atomic science. Hippocrates fostered systematic observation. Archimedes discovered specific gravity, created military weaponry. Ptolemy's geocentric theory with the earth as the center of the universe, is a unified theory accepted for centuries. Later, Copernicus establishes the heliocentric theory, with the sun as the center (55.40.00) = Limitations. The lack of practical applications. Hero identified steam power but used this study to make toys for his friend's children. There is no concern to reduce the labor of the masses because slaves do that labor. (56.56.00) = The Hellenistic Period. The Macedonian conquest. In 10 years Alexander the Great conquers Greece and eastern territories to create a tremendous empire. He dies at the age of 33. The Hellenistic period combines all the Greek influences before Alexander and those of his empire. Athens is a shining light but there is also a darker side with wars and the institution of slavery. The noble class has leisure for culture.