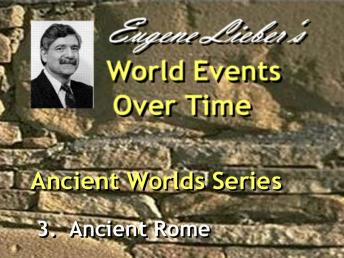 Origins of Rome. The myth of Remus and Romulus versus the historic view. Romans are conquered by the Etruscans. Founding of the Republic in 509 B.C. (3.12.00) = The Class System. The upper class patricians and the lower class plebeians. Rome population increases to 1 million. Patricians take over small land holdings of plebeians to form large estates, forcing plebeians to Rome. (6.12.00) = Politics. The ruling power is the Senate, open only to the patricians. The Senate appoints 2 consuls as magistrates, and a tribune to represent the plebeians. (8.10.00) = Expansion of Roman power. . In the next century Rome conquers Latin tribes north and south, offering the conquered people citizenship in exchange for loyalty to Rome. Series of wars in 200 B.C. against Carthage. . (11.24.00) = The 1st of 3 Punic Wars. This is a war between Rome and Carthage is over Sicily. The adaptability of the Roman military in securing victories, includes Rome rapidly creating a navy for the first time when needed. (13.24.00) = The 2nd Punic War and Hannibal. . Rome and Carthage fight over Spain. The brilliance and daring of Hannibal, the Carthage leader, who fights Rome obsessively after his father is defeated in an earlier conflict. Hannibal is eventually defeated, and later assassinated. The Macedonians are defeated in the 2nd century B.C. giving Rome control over a vast empire. (23.23.00) = The 3rd Punic War. Cato, a Roman demagogue incites war against a greatly diminished Carthage, easily wins, and proceeds to virtually eradicate the entire city. Rome now controls all the Mediterranean world and beyond. (26.59.00) = The dictatorial pattern of the generals. A general becomes popular after a military campaign, demands appointment as the First Consul by the Senate, and who then wields dictatorial power until assassinated by the next newly popular general. This despite Rome being a republic. (32.21.00) = Spartacus. The unique slave revolt of Spartacus in 71 B.C. He frees other slaves, forms a slave army, holds off the roman Legions for 2 years until finally defeated. The crucified survivors line the Apian Way for miles. (37.03.00) = Julius Caesar. A brilliant general and literary figure. His dictatorial rule distinguished by developing positive relations with the plebeians of Rome. Various senators including Cassius and Brutus conspirer against him and he is assassinated on the Ides Of March 44 B.C (39.44.00) = Marc Anthony and Octavian Caesar. Mark Anthony becomes the primary leader after the death of Julius Caesar. Cleopatra of Egypt attracts him who joins her in Egypt. In Marc Anthony's absence, Octavian Caesar, Julius Caesar's adopted young son, grows in power. He challenges Anthony and Cleopatra whom he defeats in a war, leading to suicide by both. (43.31.00) = The first Emperor of Rome. Octavian Caesar changes his name to Augustus Caesar, and in 20 B.C. becomes the first Emperor of Rome. The republic is just a façade. The empire is huge, stretching across Europe, Asia, and Africa. Rome conquers England. Augustus breaks it up into provinces. Augustus now calls himself a god in human form within the polytheistic religious belief system, consolidates his power. (48.45.00) = Problem of succession. Augustus rules for a long time, solidifies the empire. There is much palace intrigue. He is succeeded by a number of inept or pathological rulers including Tiberius, Nero, and Caligula, yet the empire holds together as structured by Augustus. (54.32.00) = The peak of the Roman Empire. Late in the 1st century A.D., the 5 good emperors ending with Marcus Aurelius rule Rome over a period of 100 years with an orderly transfer of power. (56.05.00) = Decline of the Roman Empire begins in 180 A.D. Succession problems. North borders are attacked by Germanic tribes called barbarians. Need for increased supply of slaves which are at the heart of the Roman economy. The Empire is divided into East, with Constantinople (Istanbul) as its capital, and West. (1.03.41.00) = Christianity. Emperor Constantine converts to Christianity which becomes the official religion in 225 A.D. The Western Empire, under pressure of Germanic tribes, is conquered in 476 A.D. The Eastern Empire survives as Byzantium until the Turks conquer it in the 1400s A.D. (1.06.52.00) = Factors of the decline. The borders are too large to defend. There is a lack of slaves to do the economic work. Christianity is a factor when emperors represent themselves as gods to be worshipped, rejected by Christians, and are increasingly persecuted. (1.11.10.00) = Final judgment of Rome. Culturally they imitate the grandeur of Ancient Greece, but are not up to the quality of Greek philosophy or literature. Achievements include military tactics and strategy, engineering of roads and other engineering feats. Roman law covers every aspect of society. English Common Law and the Napoleonic Code are derived from it. Rome is an early example of the rise and fall of empire, possibly inevitable. Much is to be learned from it.