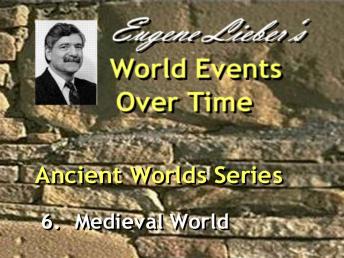 Origins of feudalism. Medieval European world covers about 1,000 years, 500-1,600 A.D. after the fall of the Roman Empire. Feudalism is the political structure of the nobility, about 5% of the population. Germanic tribes conquer the weakened Western Roman Empire. Warrior leaders evolve into kings or emperors, claiming wealth in terms of land. (3.50.00) = Feudalism. The nobility keep the lion's share of land, subdivide the rest to loyal followers, vassals, who are awarded land grants of fiefs. There are sub-vassals, dukes, barons, viscounts, under them. At the top of this pyramidal structure is the lord. Each has a set of obligations to his superior. The basis is military protection from marauding tribes. Obligations are economic ( a % of crops), military service, and social (attending celebrations and meetings). (9.01.00) = Chivalry. A sense of honor becomes the form of treatment of women by noblemen. This is not beneficial to women who are put on a pedestal as decorative with no serious potential. A larger sense of honor to one's superior binding people even applied in the brutality of the one-on-one warfare of the time. (13.27.00) = A profound backwardness. Cities become reduced to 1% of original size, all but disappearing. Roads are in disrepair, economy is confined to local areas. Trade and communication reduced. Barter replaces coinage. A thriving world backtracks. The population stagnates. (17.10.00) = Manorialism is now the economic structure. The manor house is the central building, then a church, then huts of serfs in concentric circles enclosing arable land and meadow land, with forests at the outer ring which are off limits. (20.00.00) = Serfs have the right to work strips of land owned by the lord. They are obliged to give 1/3 of crops to the lord, 1/10 to the church, and have other work obligations including tending to the lord's lands. In return, serfs had protection. The knights are the lowest level of lords, do the fighting. Serfs live in great misery. They live in straw huts with 1 room to sleep in and the rest of the hut for all else including sheltering animals in cold weather. There is no chimney to draw out smoke. Diet is mainly ale and bread, lacking in protein and vitamins. Health is precarious. They depend on folk medicine not doctors or hospitals. Amputations are done without anesthesia, usually resulting in death. Life expectancy is in the 30s. (21.04.00) = The nobles. are somewhat better off. They live in castles built for defense not comfort. They believe bathing is wrong, use perfume to mask body odors. Their diet is limited although they eat game and have wine. (23.02.00) = Pleasures in life. The harvest is celebrated by a feast by the serfs. They celebrate events at all opportunities. Sex is casual. There are formal rules but informal ways around them for survival. The manorial system lasts for a century. (25.44.00) = The Church. The Catholic Church is the dominant institution. It wields the power of excommunication. It also has economic and political influences. With its dominance comes corruption. It is a source of psychological comfort in the form of the mass, sermons, and music. There is the promise of the afterlife. It offers a sense of congregation, including socialization on Sundays. There is the beauty of the heaven. (29.14.00) = Monastic orders. The search for simplicity, order. Simplicity in the face of the worldly Church. The holding places of ancient manuscripts. Franciscans' concern for the poor. (32.29.00) = Negatives. Those not accepting established doctrine are branded heretics to be punished in the most inhumane and ghastly manners. Demand for conformity, control of thought process. Only a small part of the population is educated, the rest are overwhelmingly illiterate. Some Church brilliance is the exception. Church hostility to mass learning as a potential threat to conformity. (35.08.00) = The Crusades. Ostensibly to liberate the Holy Land, it is an opportunity to rob, rape, murder, and grab land from heathens. Many die from exposure and starvation. The Crusades introduces the end of the Middle Ages. It helps open contact and revive trade, marking the beginning of the modern age. (46.21.02) = The Black Death. 1347-1349 A.D. The bubonic plague spreads through Europe by means of fleas and rats, with a virtual 100% death rate. Whole communities are annihilated. Cause is not understood at that time. It kills 5 million or 1/3 of Europe's population, leaving a sense of doomsday and despair. Food supplies are neglected. Population craziness. Flagellants whip themselves as sinner in God. (45.54.00) = The Jews are blamed by the Flagellants, become ghettoized on manor land. They can't own land, are used by princes. Pogroms are organized attacks on the ghetto. Jews are accused of Christ killing, kidnapping children for rituals. The Jews' desire for separateness and the ghetto as security. The Pope urges against blaming the Jews for the plague since they are dying as well as everyone else.. (50.26.00) = Aftermath of the Plague. The labor force is now scarce resulting in a demand for higher pay. The towns and trade revive. Guilds provide a system of improving work status. Now workers must find jobs or starve since they are not provided for by the manor. (53.44.00) = The lords. Although they are conservative, resistant to change, but after the loss of population escaping to towns, a small minority begin to rethink their relations with serfs. They rent land at fixed rates to former serfs who are now peasants, beginning a more modern way of life. (55.36.00) = Decline of the medieval world. The Plague and the Crusades are influences for change. The beginning of capitalism and the profit motive. Marco Polo travels to China. Cultural changes influence the future Italian
Renaissance. Ideas of democracy and education are revived. Beginning of the modern world. The Protestant split of the church in the early 1500s. The ancient and medieval worlds brings the beginning of the modern world.