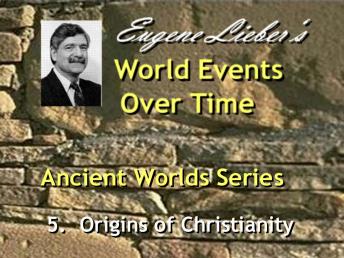 Jewish origins. Rise of Christianity without support from the Roman Empire, remarkable growth in first two centuries by persuasion alone. Those Jews not scattered in the Diaspora but remaining in Palestine are more resistant to assimilation. The early Jewish belief that God punishes and rewards in this life. Following the suffering of Jews under Roman power, a growing belief in rewards in a life after death. The Essenes renounce property as meaningless and await judgment day and a messianic intervention to establish God's kingdom on earth. (7.45.00) = Historic Jesus. These emerging beliefs appeal to many and relates to Jesus' message as written in the Gospels at a later period. Jesus is vested in traditional Jewish faith. He teaches the old values in a new style, using stories, like a prophet. His message that the end of the world is at hand appeals to many people who are suffering. Jesus as the living messiah suffering and dying but not ruling as king of the Jews. The Romans consider his preaching to be criminal and condemn him to crucifixion. (11.34.00) = Disciples. His disciples turn their despair after Jesus' death to hope in the belief of Jesus' resurrection as part of a divine plan. Still being Jews they believe their mission is to bring Jesus' message to other Jews, awaiting his return as Christ, the anointed one. This message appeals more to the Diaspora Jews who are less lied to traditional beliefs. (13.56.00) = Role of St. Paul. He is educated, sophisticated, has a vision of Jesus. He sees his mission to preach Jesus' message, becomes the greatest Christian missionary. He cuts ties with Jews, simplifies the personal links connected to God, making his religion more acceptable to the gentile world. (15.58.00) = Christian beliefs. St. Paul preaches that Jesus died not for Israel but for all mankind. People need to believe in the message of the crucifixion but those denying his message are doomed to hell. The second coming of Christ when the righteous are rewarded and the wicked punished. The afterlife is realized in the Christian Church. (20.38.00) = The Christian Church. It is seen as the mystical body of Christ. The creation of organization, rituals, sacrament, and duties. Baptism and communion relate to bathing and feeding, symbolically dying and re-emerging in life, the washing away of previous sins, the partaking of the body and blood of Christ. Church leadership. The Bishop's authority provides the only channel to salvation. Most eminent is the Bishop of Rome, the Pope, with St. Peter being the first one. Peter means rock. (24.29.00) = Early controversies. Rapid growth of early Christianity. Original gospels do not see Jesus as the son of God. Controversy of what is true Christianity. The concept of the Trinity: God the Father, the Son, and the Spirit of the Holy Ghost eventually becomes official doctrine (27.00.00) = The mission of Christianity is to convert the world to Christianity, while Judaism does not proselytize. Christianity spreads mostly in urban centers. Rural areas hold on to the old beliefs. The Roman response is that Christians can exist if they obey laws of the Empire, otherwise they are persecuted. Some Roman emperors persecuted more than others. (29.35.oo) = Successes of Christianity. Christianity is very involved in people's lives, is less abstract. There is a sense of a personal God. It has universal appeal to the commoners as well as the rich and philosophers, with its high moral standards. It is simple, direct faith, an eternal faith transcending the natural world. It is more satisfying than the old Roman gods which diminish as the Roman Empire fades. (34.35.00) = Growth. By the 4th century, Christians number 5 million out of a population of 60 million in the fading Roman Empire. Emperor Constantine converts to Christianity in the early 4th century A.D., makes it the official religion of the Roman Empire. Motivation is seeing Christianity as the wave of the future, enhancing his power. He sets official doctrine about what is expected and what is not, with heretics dealt with harshly. (37.07.00) = Evolution. These doctrines are not permanent since all religions evolve. Christianity grows, alters, changes over the centuries. Its success of early converts is impressive.