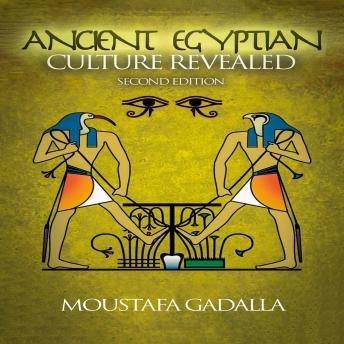 This book reveals several aspects of the Ancient Egyptian culture, such as the very remote antiquities of Egypt; the Egyptian characteristics and religious beliefs and practices; their social/political system; their cosmic temples; the richness of their language; musical heritage and comprehensive sciences; their advanced medicine; their vibrant economy; excellent agricultural and manufactured products; their transportation system; and much more. This Expanded Version of the book consists of four Parts with a total of 16 Chapters Part I : The Peoples of Egypt consists of four chapters 1 through 4, as follows: Chapter 1: The Beginning covers the age of the Egyptian antiquities being at least 39000 years, in accordance with archaeological, historical and physical evidence. Chapter 2: The Egyptian Populous covers the roots and characteristics of the [Ancient]Egyptian people, their housings, their settlements throughout the world,etc Chapter 3: The Most Religious covers Egyptian cosmology; monotheism and polytheism; animal symbolism ; and the spread of the Ancient Egyptian religion throughout the world under new 'names'. Chapter 4: The Social/Political Order covers the basis and applications of the matrilineal/matriarchal principles; the Egyptian grassroots republic system; etc Part II : The Cosmic Correlations consists of three chapters 5 through 7, as follows: Chapter 5: As Above, So Below covers the principles and applications of cosmic consciousness in the life of the Egyptians. Chapter 6: The Pharaoh, The Cosmic Link covers the true rule of the Egyptian pharaoh as a Master Servant; how did the people rule; and much more. Chapter 7: Egyptian Temples provides a quick overview of the real function/objective of the Egyptian temple; the harmonic design parameters; and much more. Part III : The Learned Egyptian consists of five chapters 8 through 12, as follows: Chapter 8: The Divine Language provides a quick overview of the modes of writing in Ancient Egypt -- the alphabetical form of writing and the imagery pictorial metaphysical symbols/script ; etc Chapter 9: The Egyptian Musical Heritage provides a quick overview of its musical heritage; the musical orchestras; the wide range of musical instruments; as well as dancing and ballet in Ancient Egypt. Chapter 10; Health and Medicine provides a quick overview about its medical profession; contents of the some Egyptian medical papyri regarding diagnosis, cures and treatments of various ailments, surgeries; and the wide range of prescriptions Chapter 11: Astronomy covers the astonishing accurate astronomical knowledge and practices such as astronomical observations and recordings, the zodiac cycle,etc Chapter 12: Geometry and Mathematics covers a quick overview of the subjects of sacred geometry and natural science, geodesy, mathematics & numerology; as well as their knowledge and applications of the sacred “ratios” of Pi and Phi. Part IV : The Vibrant Economy consists of four chapters 13 through 16, as follows: Chapter 13: The Cultivating Culture covers the outstanding application of dry-weather farming techniques; societal division of labor; and the farming community Chapter 14; The Manufacturing Industries covers The Egyptian knowledge of metallurgy & metalworking; their products; their mining activities; etc Chapter 15: Transportation Infrastructure covers a quick overview of the various high quality types of the Egyptian ships; major Egyptian coastal harbors; and land transportation Chapter 16: The Market Economy covers the workings of the Egyptian market economy; business transactions; Egyptian exports (goods and services); Egyptian imports; as well as the rise and fall of international commerce, that was tied to Ancient Egypt as the economical engine of the ancient world.