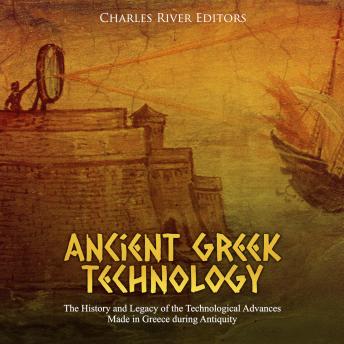 Ancient Greek Technology: The History and Legacy of the Technological Advances Made in Greece during Antiquity

Dominated to this day by the sprawling white marble complex of the Acropolis, Athens is a city which is immensely and rightly proud of its past. For a period of roughly three centuries, the polis of Athens stood, if not in a position of unchallenged supremacy among the cities of Hellas, then at the very least among its three most important polities. Its fledgling empire, though small by the standards later set by Alexander or the Romans, or even by those of its ancient enemy Persia, nonetheless encompassed cities as far afield as Asia Minor and Southern Italy, a remarkable fact considering such expansion was achieved by the inhabitants of a single city and its immediate surroundings, rather than by an entire nation.
For much of its history, the Athenian navy was the single mightiest force in the Mediterranean, having defeated the overwhelming might of Persia in pitched battle upon the open sea numerous times. The Athenian army itself, though subordinate to its naval power - a sop to the fact that it was trade and empire-building that had made Athens rich - was nothing to be sneered at, as it succeeded in meting out a humiliating defeat to Darius's Persians at Marathon.
Yet despite a martial tradition that, if taken as a whole, was second to none save the Spartans, Athens is chiefly remembered for two reasons: its political system, which would in time form the nucleus of all Western democratic systems of government, and the remarkable number of outstanding individuals which, during the Golden Age of Athens, lived and flourished in the enlightened city-state. The Ancient Athenians formed the backbone of the West's entire culture, from the arts to philosophy and everything in between.
In virtually all fields of human endeavor Athens was so much at the forefront of dynamism and innovation that the products of its most brilliant minds remain not only influential but entirely relevant to this day. In the field of medicine, the great physician Hippocrates not only advanced the practical knowledge of human anatomy and care-giving but changed the entire face of the medical profession. The great philosophers of Athens, men like Aristotle, Socrates, and Plato, interrogated themselves with startling complexity about the nature of good and evil, questioned the existence of divinity, advocated intelligent design, and went so far as to argue that all life was composed of infinitesimal particles. Great architects and sculptors such as Phidias produced works of art of such breathtaking realism and startling dynamism that they later formed the driving force behind the resurgence of sculpture during the Renaissance and served as masters to artists such as Michelangelo, Bernini, and Donatello. The plays of dramatists such as Aristophanes not only displayed an acerbic wit and a genius for political satire so pronounced that their works continue to be performed - and topical - to this day, and they served as the inspiration for virtually all playwrights from Shakespeare to the present day. And this does not take into account the host of equally brilliant mathematicians, natural philosophers, historians, astronomers and politicians that the city's great schools nurtured and produced.
The flowering of Greek civilization was further made possible by an increase of trade between the cities and with other civilizations. Trade became a major occupation on account of the scarcity of agricultural land in the largely mountainous regions of the Balkan peninsula. The polis of Athens, in particular, assumed economic dominance in the Aegean in from the 6th century BCE. The consequent increase in wealth, resources and population made a cultural renaissance possible. Commerce, in turn, led to the rise of an affluent aristocratic class which had the leisure to devote itself to learning, philosophy, and art. It also led to an industrial class of freemen who were ar

Ancient Greek Technology: The History and Legacy of the Technological Advances Made in Greece during Antiquity