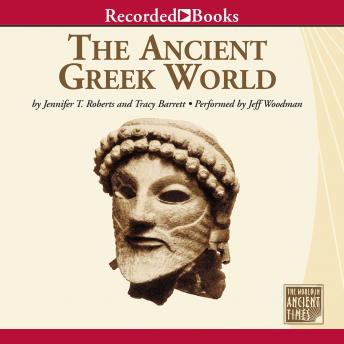 With a list of characters from Achilles to Zeus-and all the gods and mortals in between-The Ancient Greek World is one of the most comprehensive history textbooks on one of the most momentous civilizations in history. The Greeks are considered the first people in the ancient Western world to record their own history, and remnants of their cultural, philosophical, political and architectural advances remain to this day. Homer, Sophocles, aeschylus, Socrates, Aristotle and Plato set the ground rules for modern literature, theater and philosophy. The Parthenon still stands as an example of structural ingenuity. And many countries still practice democracy and participate in the Olympics. From everyday life to political upheaval-like the Pelopponesian War and Alexander the Great's conquests-the Greeks believed they were an exceptional people, and their influence is still present today. As part of the World in Ancient Times series, this text is a witty, resourceful guide for anyone who wishes to learn more about this stunning culture. Listeners will feel they've traveled back in time with the stirring narration of Jeff Woodman.