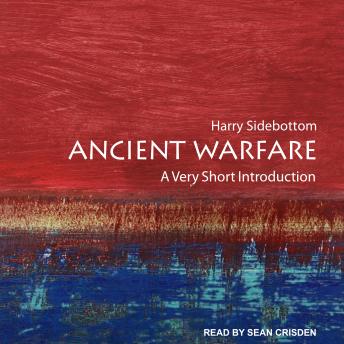 Greek and Roman warfare was unlike that of any other culture before or since. The key difference is often held to be that the Greeks and Romans practiced a 'Western Way of War,' in which the aim is an open, decisive battle-won by courage instilled, in part, by discipline. Here, Harry Sidebottom looks at how this Western Way of War was constructed and maintained by the Greeks and Romans and why this concept is so prevalent today.

All aspects of ancient warfare are thoroughly examined-from philosophy and strategy to the technical skills needed to fight. Sidebottom examines war in the wider context, showing how wars were able to shape classical society, and how an individual's identity was sometimes constructed by war, as in the case of the Christian soldier fighting in God's name. He also explores the ways in which ancient society thought about conflict: Can a war be just? Why was siege warfare particularly bloody? What role did divine intervention play in the outcome of a battle? Taking fascinating examples from the Iliad, Tacitus, and the Persian Wars, Sidebottom uses arresting anecdotes to show that any understanding of ancient war is an ongoing process of interpretation.