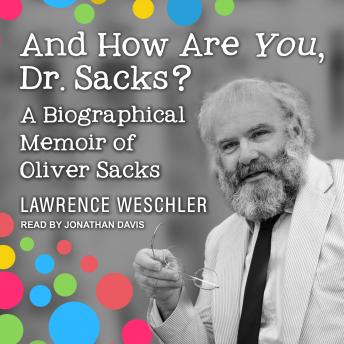 And How Are You, Dr. Sacks?: A Biographical Memoir of Oliver Sacks

Lawrence Weschler sets Oliver Sacks's brilliant table talk and extravagant personality in vivid relief, casting himself as a beanpole Sancho to Sacks's capacious Quixote. We see Sacks rowing and ranting and caring deeply; composing the essays that would form The Man Who Mistook His Wife for a Hat; recalling his turbulent drug-fueled younger days; helping his patients and exhausting his friends; and waging intellectual war against a medical and scientific establishment that failed to address his greatest concern: the spontaneous specificity of the individual human soul. And all the while he is pouring out a stream of glorious, ribald, hilarious, and often profound conversation that establishes him as one of the great talkers of the age.

Here is the definitive portrait of Sacks as our preeminent romantic scientist, a self-described 'clinical ontologist' whose entire practice revolved around the single fundamental question he effectively asked each of his patients: How are you? Which is to say, How do you be?

A question which Weschler, with this book, turns back on the good doctor himself.