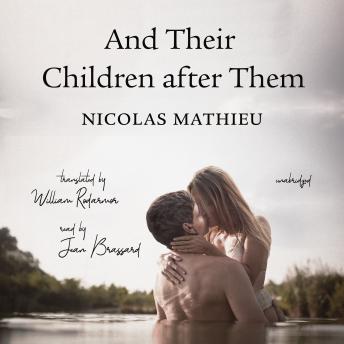 And Their Children after Them

August 1992. One afternoon during a heat wave in a lost valley somewhere in eastern France, with its dormant blast furnaces and its lake, fourteen-year-old Anthony and his cousin decide to steal a canoe to find out what it’s like on the other side at the famous nudist beach. The trip ultimately takes Anthony to his first love and a first summer that will determine everything that happens afterwards.

Nicolas Mathieu conjures up a valley, an era, adolescence, and the political journey of a young generation that has to forge its own path in a dying world. Four summers and four defining moments, from “Smells Like Teen Spirit” to the 1998 World Cup, which encapsulate the hectic lives of the inhabitants of that intermediate France of medium-sized cities and their quiet residential estates, astride the countryside and the concrete expanses of the outer suburbs.

And Their Children after Them is the portrait of a France far removed from the centers of globalization, alternating between decency and rage. A France where almost everybody lives, and which many people would like to forget.

And Their Children after Them