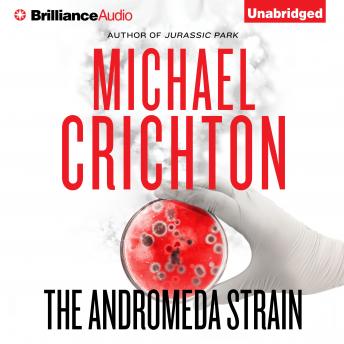 First published fifty years ago, The Andromeda Strain redefined the science fiction genre, and immediately established Michael Crichton as one of the brightest voices in contemporary literature worldwide.

A military space probe, sent to collect extraterrestrial organisms from the upper atmosphere, is knocked out of orbit and falls to Earth. Twelve miles from the crash site, an inexplicable and deadly phenomenon terrorizes the residents of a sleepy desert town in Arizona, leaving only two survivors: an elderly addict and a newborn infant.

The United States government is forced to mobilize Project Wildfire, a top-secret emergency response protocol. Four of the nation’s most elite biophysicists are summoned to a clandestine underground laboratory located five stories beneath the desert and fitted with an automated atomic self-destruction mechanism for cases of irremediable contamination. Under conditions of total news blackout and the utmost urgency, the scientists race to understand and contain the crisis. But the Andromeda Strain proves different from anything they’ve ever seen—and what they don’t know could not only hurt them, but lead to unprecedented worldwide catastrophe.