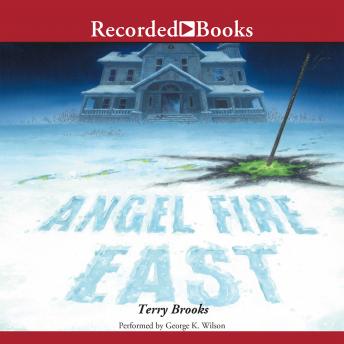 Angel Fire East brings Terry Brooks' breathtaking trilogy of the battle between good and evil to an astounding end. Begun with Running With the Demon and continued with Knight of the Word, this suspenseful fantasy epic has won popular and critical acclaim for its New York Times best-selling author. For 25 years John Ross, a Knight of the Word, has been haunted by dreams of a horrifying Armageddon. His life has become an all-consuming battle against the Void that threatens to turn his dreams into reality. Now John has discovered a newly born gypsy morph, a rare, magical creature so powerful that it could prove an invaluable tool against evil. But can he solve its mystery before the Void destroys it? Desperate, he enlists Nest Freemark, a young ally from his past. George Wilson confers the third in this series with the same level of energy that electrified the first two. Mystery and suspense abound in a fantasy novel that will remind you you're never too old to be afraid of the dark.