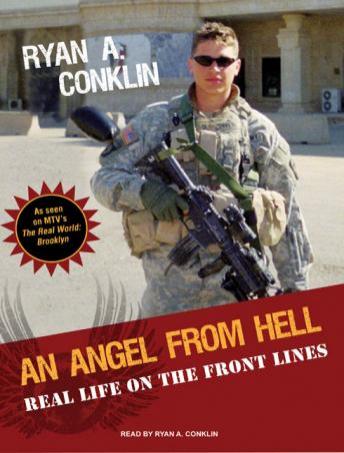 An Angel from Hell: Real Life on the Front Lines

Written By: Ryan A. Conklin

Narrated By: Ryan A. Conklin

Ryan A. Conklin enlisted in the U.S. Army at age seventeen, following 9/11, and joined Angel Company. As a turret gunner with the famed 101st Airborne 'Screaming Eagles' and a member of the famed 'Rakkasans' regiment-the most decorated regiment in the U.S. Army-he endured hellish conditions in the war-torn city of Tikrit, Iraq.

After he returned to the States, he became a cast member on The Real World: Brooklyn in 2008. That came to an end when he received his notice recalling him to duty.

An Angel from Hell is a gritty, blunt, and laugh-out-loud funny war memoir from the grunt's perspective. Conklin reveals what the Iraq war is really like, day to day-the misery, the boredom, the absurdity, the horror, and even the moments of grace. With stunning candor and wisdom beyond his years, Conklin has documented a complex and unavoidably life-changing experience for his generation.

Angel from Hell: Real Life on the Front Lines

by Ryan A. Conklin