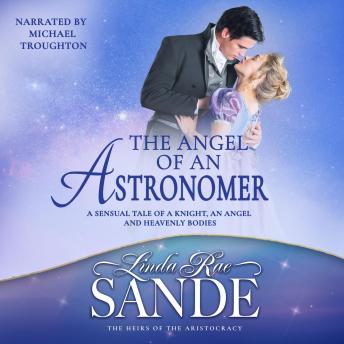 The Angel of an Astronomer

#1 of The Heirs of the Aristocracy

A sensual tale of a knight, an angel and heavenly bodies

George, Viscount Hexham, is quite literally thunderstruck when he meets Lady Anne in the park, and he can’t get her off his mind. Her brother, Gabe, is happy to act as a matchmaker, never once mentioning he might already be acting on behalf of the other side. Can two who are so perfectly matched end up married before Anne must endure her first Season in London?

Meanwhile, when a neighbor appears to be spying on George’s twin sister through the telescope in his garden observatory, an incensed Lady Angelica is determined to give him a piece of her mind. Sir Benjamin may end up with her heart as well, as mistletoe and moonlight work their magic in The Angel of an Astronomer.