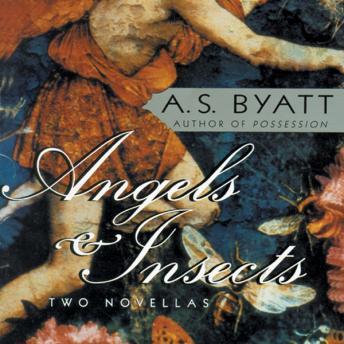 In two breathtakingly accomplished novellas, A. S. Byatt explores the landscape of Victorian England, where science and spiritualism are both popular manias and domestic decorum coexists with brutality and perversion.
In "Morpho Eugenia", a shipwrecked naturalist is rescued by a wealthy family and immediately falls for the eldest daughter. But before long the family's clandestine passions come to seem as inscrutable as the behavior of insects. In "The Conjugial Angel," a circle of fictional mediums finds itself haunted by the ghost of a very real historical personage.
Angels & Insects offers further proof of Byatt's prodigious powers and magical sympathy for characters who might have been our great-great-grandparents.