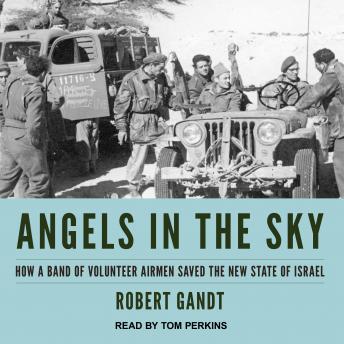 Angels in the Sky: How a Band of Volunteer Airmen Saved the New State of Israel

Angels in the Sky is the gripping story of how an all-volunteer air force helped defeat five Arab nations and protect the fledgling Jewish state.

It is the exhilarating account of a ragtag band of volunteer airmen from around the world who fought for Israel during the war of independence. They arrived from America, Canada, Britain, France, and South Africa. Almost all were World War II combat veterans. Many, but not all, were Jewish, and many knowingly violated their nations' embargoes on the shipment of arms and aircraft to Israel. They smuggled in Messerschmitt fighters from Czechoslovakia, painting over swastikas with Israeli stars. They flew British-built Spitfires and American Mustangs, risking their lives for a righteous cause. Surrounded by Egyptian, Jordanian, Iraqi, Syrian, and Lebanese forces, Israel would have been crushed without the air support provided by the 'angels in the sky.'

Briskly written and based on first-person interviews and extensive archival research, here is a modern-day David-and-Goliath tale and popular history at its best.

Angels in the Sky: How a Band of Volunteer Airmen Saved the New State of Israel