Anger Is an Energy: My Life Uncensored 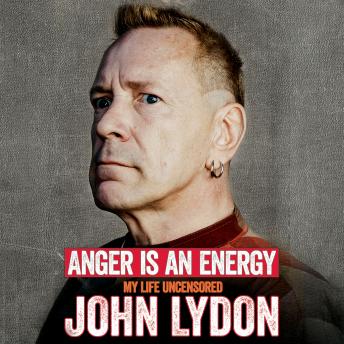 John Lydon is an icon-one of the most recognizable and influential cultural figures of the last forty years. As Johnny Rotten, he was the lead singer of the Sex Pistols, the world's most notorious band. The Pistols shot to fame in the mid-1970s with songs such as 'Anarchy in the U.K.' and 'God Save the Queen.' So incendiary was their impact at the time that in their native England, the Houses of Parliament questioned whether they violated the Traitors and Treasons Act, a crime that carries the death penalty to this day. The Pistols would inspire the formation of numerous other groundbreaking groups, and Lydon would become the unlikely champion of a generation clamoring for change.
Following on the heels of the Pistols, Lydon formed Public Image Ltd (PiL), expressing an equally urgent impulse in his character: the constant need to reinvent himself. From their beginnings in 1978, PiL set the groundbreaking template for a band that continues to challenge and thrive to this day, while also recording one of the eighties most powerful anthems, 'Rise.'
John Lydon remains a captivating and dynamic figure to this day-both as a musician, and, thanks to his outspoken, controversial, and from-the-hip opinions, as a cultural commentator. In Anger Is an Energy, he looks back on a life full of incident, from his beginnings as a sickly child of immigrant Irish parents growing up in postwar London to his present status as a vibrant, alternative hero.

Anger Is an Energy: My Life Uncensored