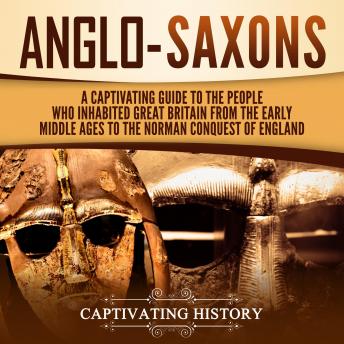 Anglo-Saxons: A Captivating Guide to the People Who Inhabited Great Britain from the Early Middle Ages to the Norman Conquest of England

If you want to discover the captivating history of the Anglo-Saxons, then pay attention...
There was a time before England was united. This was a time before William the Bastard decided to prove to his contemporaries that his bastard moniker would be erased with a swift conquest of the biggest island northwest of Europe. A time before the Battle of Hastings and the year 1066. A time when many petty kingdoms ruled, conquered, and were liberated, time and time again, by a specific people group. A people group that is, in fact, a blend of many and that authors of later dates would collectively call the Anglo-Saxons.
The Anglo-Saxons were, indeed, an odd group of people to take control of Britain. But they didn't do it all at once, and just like any other people in history, they had a period of adjustment, growth, reconstruction, and eventual rise to prominence.
In Anglo-Saxons: A Captivating Guide to the People Who Inhabited Great Britain from the Early Middle Ages to the Norman Conquest of England, you will discover topics such as
Anglo-Saxons ArriveEarly Anglo-Saxons: Origins and Pre-Settlement HistoryThe Culture of Anglo-Saxons: Religion, Customs, Social Hierarchy, Early ChristianityEveryday Life of Anglo-Saxon England: Jobs and Division of Labor, Food and Drink, Clothes, Architecture, Travel, Wars, Gender and Age Norms, Art, Written WorksAnglo-Saxon KingdomsAnglo-Saxon LegacyAnd much, much more!So if you want to learn more about the history of the Anglo-Saxons, scroll up and click the 'add to cart' button!

Anglo-Saxons: A Captivating Guide to the People Who Inhabited Great Britain from the Early Middle Ages to the Norman Conquest of England

This title is due for release on June 9, 2019
We'll send you an email as soon as it is available!