Anna Of The Five Towns: Complete 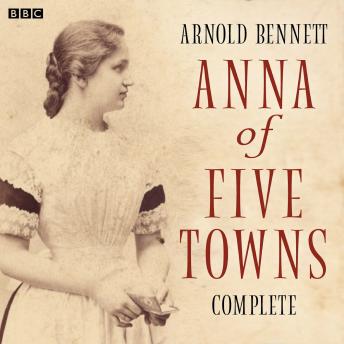 A BBC Radio 4 dramatisation of Arnold Bennett's tale of love, tyranny and rebellion, 'Anna of the Five Towns'. Brought up in the repressive tradition of Methodism by her miserly father, Anna Tellwright dreams of independence and freedom. On coming of age she learns that she is to inherit a fortune and realises that she is loved by the charismatic Henry Mynors. But with the money comes responsibility, and Anna's growing concern for William, the son of one of her tenants, leads her to a defiant act that threatens everything... Arnold Bennett's 'Anna of the Five Towns' was dramatised by Helen Edmundson, and stars Charlotte Riley as Anna, David Schofield as Tellwright, Emilia Harker as Young Agnes and Michael Socha as William. Also featured amongst the cast are James Masters, Lee Williams, Rosina Carbone, Olwen May, Andrew Westfield, Jonathan Keeble and Jacqueline Redgwell. Originally broadcast as the 'Classic Serial' in two parts on 6 and 13 March 2011.

Anna Of The Five Towns: Complete