Anne Manx and the Blood Chase 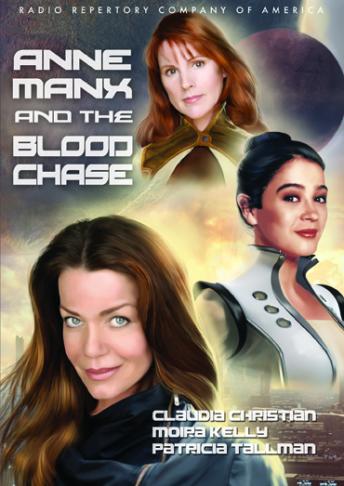 Anne Manx is dying! In the spellbinding sixth installment, Anne (Claudia Christian, Babylon 5), the galaxy's finest P.I., trails a cryptic clue to Balduria seeking to save her life. Hot on her tail, the flame-haired fiend, Jean Richmond (Patricia Tallman, Babylon 5, Night of the Living Dead 1990) is going to steal the secret to multiple lives for herself.

Jam-packed with fast-paced dialog and two-fisted double entendres, Anne Manx and the darkly duplicitous Brighid (Moira Kelly, One Tree Hill, West Wing, The Lion King) spiral into danger as they try to outwit Chief Arum (Jerry Robbins, Powder River, Beacon Hill) and the entire planet who are literally out for their blood.

Laughs at the edge of your seat, with a hard-boiled and scandalous plot wrapped in a cinematic sound design and music score that brings out the best in the powerhouse performances of this stellar cast. Anne Manx and the Blood Chase will make you believe in scream therapy!

Anne Manx and the Blood Chase