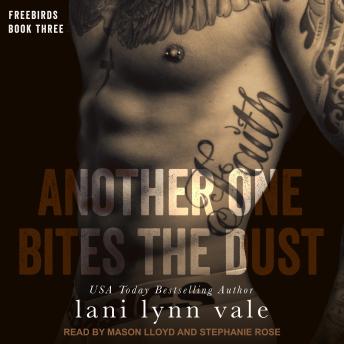 Another One Bites the Dust

I wanted him, but couldn't find the courage to have him. You know that feeling, the one where you're too scared to go to sleep, too scared to go out, and too scared to do anything? Ever since my assault, I've been functioning, but not living. That was until I met that motorcycle riding man with such a deep gravelly voice that it sent shivers down my spine. He helped me through some of the darkest moments of my life.

She was a cock tease pure and simple. Or so I thought. What I believed to be a game on her part, turned out to be a bone-deep fear of everyday life. We helped each other cope, and slowly our friendship turned into something more.

Circumstances broke the two of us apart just as we decided we wanted to be together. A vengeful woman sets out to ruin Max and anything he holds dear in his life. Payton has gone through so much in her life that enduring one more thing just might break her. Only Max taught Payton a few things. Never hold back. Never hesitate. Do something stupid, and always learn from your mistakes. Together, they can overcome anything.

Max is the epitome of a book hero, I need a Max! His protectiveness is extremely HOT! I feel like I should of listened/read to the books in the series prior to this one, however I did enjoy the story. Hot Military Guy ✔ Drama ✔ Humor ✔ Suspense ✔ Checked all my boxes!

“Baby, I’d never let you fall. Never. The only way that would ever happen would be if I was dead, or both my legs and arms didn’t work. If one of them worked, I’d claw my way to you. I’d do everything in my power to watch over you. Only death would separate me from your side.” Another One Bites the Dust is one of my favorite's in the Freebirds series. Let's be honest, I love everything LLV writes but Max and Payton's story was one of my highly anticipated ones. Payton has been attracted to Max since they met but because she was a victim of an assault, she's also terrified of getting close to him. Max, not knowing this, believes she only wants to be friends. But when she finally opens up to him, Max helps Payton heal in the sweetest way. Swoon. “His woman doesn't enjoy sex with him says something about the man, not the woman. It's the man's job to figure out what the woman likes, what will bring out the wild in her. Let me let you in on a little secret; I can make you wild. Don't doubt it.” When Max is deployed, he ends up with an enemy who's willing to do anything to stop him from being happy, and the boys of Free have their hands full keeping everyone safe. Action packed, laugh out loud moments and characters that I just can't get enough made this a five star book for me. I think the narrators did a really good job of capturing the characters. I do think I liked Stephanie a little more as she had more inflection to her voice and was easier to follow the transitions between different character dialogue and plot/back story but I enjoyed listening to it a lot and I would definitely listen to more from both narrators.