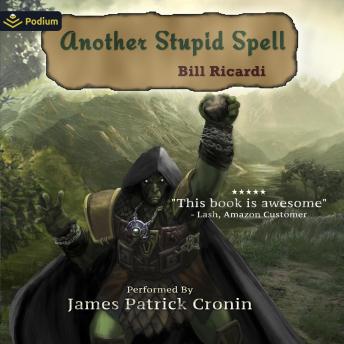 Sorch is an orc mage in a world where orcs are cursed with stupidity every time they cast a spell. The only spell he can safely cast is Enhance Intelligence, which boosts his IQ for a fraction of a second before the curse drains it all away again.

Normally casting such a spell would be pointless, but Sorch's tribe has found a way to benefit. Magic that is cast near a mysterious artefact called the ‘Voodoo Engine’ causes invisible hands to appear, and these hands get work done for his tribe. Sorch is a slave to the Voodoo Engine, casting a single spell over and over again to avoid being beaten by the chief’s warrior caste.

While foraging for food on one fateful night, our hero happens upon two human mages who are in big trouble. He saves their lives, and in return they give him an amulet that will make his life easier. Unbeknownst to the humans, their gift grants Sorch the power to break the cycle of intelligence drain and physical abuse. With the help of his friend and mentor, Shaman, Sorch becomes a real mage.

Sorch leaves his swamp and embarks on a series of incredibly exciting and dangerous adventures. During his travels he encounters horrible injury, magical treasures, love, snow, university admissions tests, a plot against the Kingdom, and then of course he saves the world. Or does he?

Be prepared to rethink everything you know about thinking. If your own intelligence was the fuel that your magic ran on, how brightly would you dare to burn?