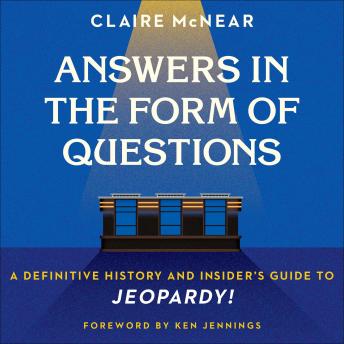 Answers in the Form of Questions: A Definitive History and Insider's Guide to Jeopardy!

What is the smartest, most celebrated game show of all time? In this insider's guide, discover the rich history of Jeopardy! -- the beloved game show that has shaped our culture and entertained audiences for years.
Jeopardy! is a lot of things: record-setting game show, beloved family tradition, and proving ground for many of North America's best and brightest. Nearly four decades into its current edition, Jeopardy! now finds itself facing unprecedented change.This is the chronicle of how the show became a cross-generational touchstone and where it's going next. ANSWERS IN THE FORM OF QUESTIONS dives deep behind the scenes, with longtime host Alex Trebek talking about his life and legacy and the show's producers and writers explaining how they put together the nightly game. Readers will travel to bar trivia showdowns with the show's biggest winners and training sessions with trivia whizzes prepping for their shot onstage. And they'll discover new tales of the show's most notable moments-like the time the Clue Crew almost slid off a glacier-and learn how celebrity cameos and Saturday Night Live spoofs built a television mainstay. ANSWERS IN THE FORM OF QUESTIONS looks to the past -- and the future -- to explain what Jeopardy! really is: a tradition unlike any other.

Answers in the Form of Questions: A Definitive History and Insider's Guide to Jeopardy!