The Antediluvian History of Earth 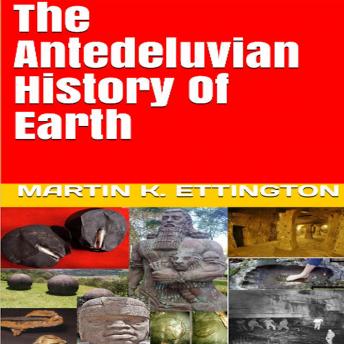 This compilation of books all have an interrelated theme which is that the history of the Earth involves ancient megalithic structures, artificial objects millions of years old, and Giants who have existed back to before land animals had evolved.
The first book is titled Ancient and Prehistoric Civilizations. In this book there are many ancient megalithic ruins of civilizations which push the frontier of our understanding of the origins of civilization by many thousands of years. Ancient Giants may also have been involved in these constructions from the proximity of their remains associated with these sites.
The second book is titled Ancient and Prehistoric Civilizations-Book Two. In this book I researched and found additional megalithic ruins which also increase the mystery of who built them since many of these ruins must have been built way before the accepted start of human civilization.
The next book is titled “The Real Atlantis-In the Eye of the Sahara” and is a strong case for this location in west Africa to be the site of the legendary Atlantis.
Book four is titled Strange Objects Which Should Not Exist I did a review of artificial objects found with ages going back hundreds of millions of years. These findings also include anomalous imprints of Giants in rocks which are 100 to 200 million years old.
Book five is titled “The History of Antediluvian Giants” and it covers the existence of giants not only in historical times but millions of years ago—as far back as 300 million years ago.
Book six is titled Aliens are Already Among Us. In this book I examined how long Aliens have been on this planet and how they have influenced us. My conclusion is that they have been here at least for many thousands of years and possibly much longer.

This title is due for release on January 12, 2020
We'll send you an email as soon as it is available!