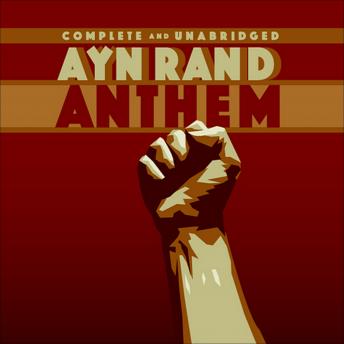 Ayn Rand's classic bestseller, Anthem, is the unforgettable tale of a nightmarish totalitarian future-and the ultimate triumph of the individual spirit. First published in 1938, and often compared with Orwell's 1984 and Huxley's Brave New World, this beautifully written story has introduced millions to Rand's provocative worldview.Rand's protagonist, Equality 7-2521, describes a surreal world of faceless, nameless drones who "exist through, by and for our brothers who are the State. Amen." Alone, this daring young man defies the will of the ruling councils and discovers the forbidden freedoms that prevailed during the Unmentionable Times. In other words, he finds and celebrates the power of the self. In doing so, he becomes the prototypical Rand hero-a bold risk-taker who shuns conformity and unabashedly embraces egoism.This exciting dramatization features an electrifying performance by veteran actor and former BBC Drama Repertory Company member Paul Meier. It is certain to be the definitive recording of Anthem-and a milestone in audio interpretation of literary classics.