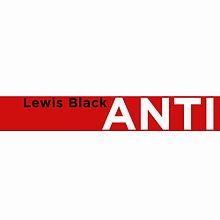 Known for flouting authority of all stripes at the mic, perpetually blustery and brilliant curmudgeon-err, comedian-Lewis Black skips the jeremiad on his latest album, leaving his skewering of Washington's denizens on the back-burner in favor of hilarious reflections on losing his virginity to a skipping record, the relative lameness of Chanukah (dreidels and school supplies aren't nearly as satisfying as you might think), the most hopeful people in the world (hint: you'll find them wandering in a deluded haze in both Scotland and Reno), and anticipation's place as the greatest emotion of all. Black's 2008 release "Anticipation" finds the Grammy-winning, Emmy-hosting author and television star in a mellower mood, having found that, after a year or two of leaving audiences alternately rolling in the aisles and hoping for sweet, swift deaths in the wake of his vicious and perfectly-aimed political onslaughts, he's, well, in need of a sunnier topic or two. While he does lament the fact that the only appropriate candidate for the highest office in this land is the universally loved Santa Claus (at the very least, he rants, we could make it Constitutionally mandated that all presidents must wear a Santa suit on foreign policy visits), Black spends the bulk of his time here in kinder, gentler territory, while still keeping up his trademark frenetic pace and subtle, masterful call-backs. In short, "Anticipation" is a joy, leaving listeners wetting themselves while also whetting their appetites for Black's inevitable evisceration of his next juicy victim-slated for selection in November 2008.