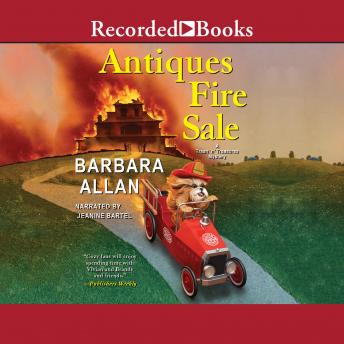 The award-winning, laugh-out-loud adventures of antiques dealers Brandy Borne and her drama-queen mom Vivian have made Trash 'n' Treasures 'one of the funniest cozy series going' (Ellery Queen Mystery Magazine). In the latest installment, after flames consume a historic mansion full of priceless treasures, along with its occupant, the question arises: who charred the corpse? Brandy and Vivian are on the case in their fourteenth Trash 'n' Treasures Mystery! That local theater diva of a certain age, Vivian Borne--a.k.a. Brandy's mother--is sheriff of Serenity County now, but still hot on the trail of precious antiques. On a tour of the historic Wentworth Mansion, the two dedicated dealers are aglow at the treasure trove of priceless objects...never dreaming everything will turn to ashes, hours later. A charred corpse in the ruins is identified as the mansion's caretaker, a one-time flame of Vivian's. But Tony Cassato--Brandy's beau and Serenity's Chief of Police--throws cold water on Sheriff Vivian's suspicions of murder. Then Brandy spots a certain familiar item for sale on the internet, and Mother suspects the fire was just a smoke screen. When their doggie detective, Sushi the Shih Tzu, sniffs out a second body in the woods, Mother and Brandy turn up the heat on a homicidal torcher. Because any killer who takes on the Borne girls is playing with fire. Don't miss Brandy Borne's tips on buying and selling antiques on the internet!