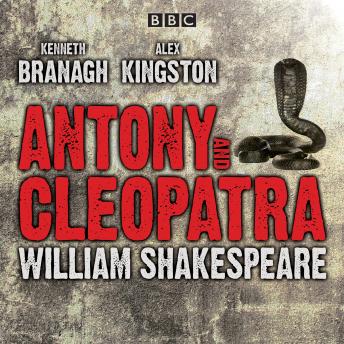 Kenneth Branagh and Alex Kingston star in Shakespeare's tragedy of love and power.

As part of BBC Radio 3's celebration of the 450th anniversary of the birth of William Shakespeare, Kenneth Branagh and Alex Kingston star in this brand new production.

Lovers, politicians, superstars. Antony & Cleopatra is Shakespeare’s late and epic tragedy of mature love, and the catastrophic fall from grace and power that it brings about. Irresistibly drawn together, the couple are surrounded by friends, enemies, admirers and critics, none of who remain unscathed by the folly and heartbreak of this magnificent pair. As empires clash around them, their destiny seems inevitable: to love each other ‘til death and even beyond.