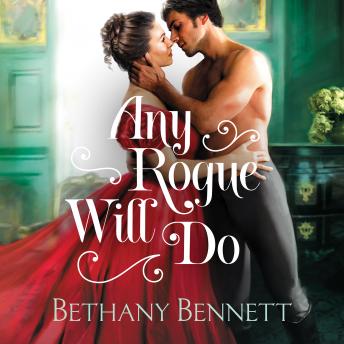 Any Rogue Will Do

In a 'splendid Regency-set debut' for fans of bestselling authors Sarah MacLean, Lenora Bell, and Kerrigan Byrne, the rogue who once ruined Lady Charlotte's reputation is now the only one who can save her (Publishers Weekly, Starred Review).

For exactly one season, Lady Charlotte Wentworth played the biddable female the ton expected -- and all it got her was society's mockery and derision. Now she's determined to be in charge of her own future. So when an unwanted suitor tries to manipulate her into an engagement, she has a plan. He can't claim to be her fiancé if she's engaged to someone else. Even if it means asking for help from the last man she would ever marry.

Ethan, Viscount Amesbury, made a lot of mistakes, but the one he regrets the most is ruining Lady Charlotte's reputation. Going along with her charade is the least he can do to clean the slate and perhaps earn her forgiveness. Pretending to be in love with the woman he's never forgotten is easy. What isn't easy is convincing her to give him a second chance.

Any Rogue Will Do