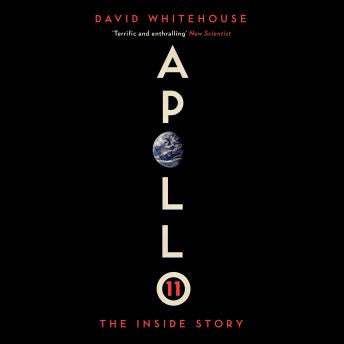 Apollo 11: The Inside Story

Informed by extensive interviews with astronauts such as Neil Armstrong, Buzz Aldrin, Gene Cernan, David Scott, John Young, Alan Shepard, Charlie Duke, Al Bean, Gordon Cooper, Al Worden, Walt Cunningham, Tom Stafford, Dick Gordon, John Glenn, Pete Conrad, Edgar Mitchel, James Irwin, Stu Roosa, Ron Evans, Deke Slayton, Wally Schirra, as well as key politicians and NASA personnel
Fifty years ago in July 1969, Apollo 11 became the first manned mission to land on the moon, and Neil Armstrong the first man to step onto its surface. President Nixon called it the greatest week since creation.
In the most authoritative book ever written about Apollo, David Whitehouse reveals the true drama behind the mission, telling the story in the words of those who took part—based around exclusive interviews with the key players.
This enthralling book takes us from the early rocket pioneers to the shock America received from the Soviets’ launch of the first satellite, Sputnik; from the race to put the first person into space, through President Kennedy’s enthusiasm and later doubts, to the astronauts’ intense competition to leave the first footprint.
Here is the story as told by the crew of Apollo 11 and the many other astronauts who paved the way or went to the moon themselves after Armstrong, Aldrin and Collins. Astronauts, engineers, politicians, NASA officials, Soviet rivals—all tell their own story of a great moment of human achievement.
The full list of interviewees includes NASA employees such as James Fletcher, Roco Petrone, Brainerd Homes, Bob Gilruth, George Mueller, James Webb, John Houbolt, Robert Seamans, Max Faget, Director of the NASA Jet Propulsion Laboratory William Pickering and Sergei Khrushchev, son of Soviet Premier.

Apollo 11: The Inside Story