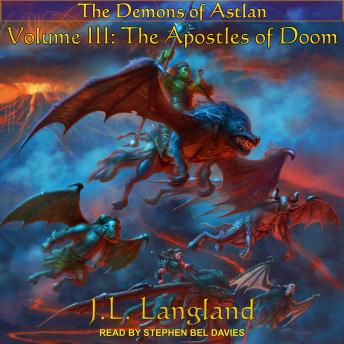 The Apostles of Doom

The Restoration of Glory

After 4,000 years of waiting, Prophecy has been fulfilled! The Dark Lord Tommus, heir to the Throne of Orcus, has relit Mount Doom in the Abyss! It is time for the Orcs to reclaim their rightful place in the multiverse!

As the orcs rejoice and race to rebuild the connections between their worlds and the Abyss and the alvar gird for war, Tom discovers his new home comes with some unexpected guests-guests who may provide him with leverage in his conflict with the god Tiernon.

Hilda and the avatars of Tiernon work to establish a new base of operations upon the plains of Murgatroy to launch a rescue mission for Talarius.

Meanwhile, aboard Dante's Inferno, Oorstemoth and the Rod invade the Abyss on their joint mission to rescue Talarius and arrest Lord Edwyrd.

Exador needs the assistance of the Storm Lords to destroy Lenamare and the Council of Wizardry and seize The Book once and for all. In return he must first recreate the lost works of the Dark Apostle.