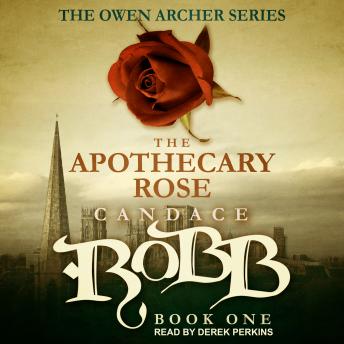 In the year of our Lord 1363, two suspicious deaths in the infirmary of St. Mary's Abbey catch the attention of the powerful John Thoresby, Lord Chancellor of England and Archbishop of York. One victim is a pilgrim, while the second is Thoresby's ne'er-do-well ward, both apparently poisoned by a physic supplied by Master Apothecary Nicholas Wilton. In the wake of these deaths, the archbishop dispatches one-eyed spy Owen Archer to York to find the murderer.

Under the guise of a disillusioned soldier keen to make a fresh start, Owen insinuates himself into Wilton's apothecary as an apprentice. But he finds Wilton bedridden, with the shop being run by his lovely, enigmatic young wife, Lucie. As Owen unravels a tangled history of scandal and tragedy, he discovers at its center a desperate, forbidden love twisted over time into obsession. And the woman he has come to love is his prime suspect.