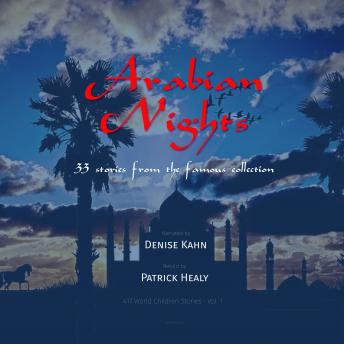 The teacher, Patrick Healy, traveled around the world, talked with people in different places, and collected around half thousand myths, legends, and folktales and their several alternative versions. His opinion and comments (directly or indirectly) are inevitable.

This is the first volume of his work. Patrick grouped together 33 famous Arabian children's stories and myths with his words. He retold the stories with his own opinion and approach to them. Patrick is an Australian writer who has an abiding interest in the folklore of different cultures. He has lived and worked in Hong Kong for over twenty-five years as a high school teacher. Patrick has traveled extensively throughout Asia and speaks both Cantonese and Mandarin fluently.

The First Old Man and of the Deer;

The Merchant and the Genie;

The Second Old Man, and of the Two Black Dogs;

The Husband and the Parrot;

The Vizier Who Was Punished;

The Young King of the Black Isles;

The First Monk, Son of a King;

The Second Monk, Son of a King;

The Envious Man and of Him Who Was Envied;

The Third Monk, Son of a King;

The Seven Voyages of Sinbad the Sailor;

The Adventures of Prince Camaralzaman and the Princess Badoura;

Noureddin and the Fair Persian;

Aladdin and the Wonderful Lamp;

The Adventures of Haroun-al-Raschid, Caliph of Bagdad;

Two Sisters Who Were Jealous of Their Younger Sister;

This title is due for release on November 23, 2017
We'll send you an email as soon as it is available!