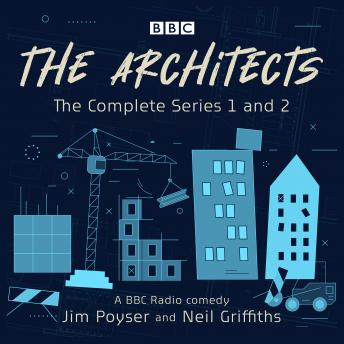 The Architects: The complete series 1 and 2: A BBC Radio comedy

Arch-Brutalist Sir Lucien founded his architectural practice on a commitment to brutalist concrete in all its forms. But fashion has been a cruel mistress, and four decades later things are not going well for Sir Lucien and his loyal(ish) employees. With no money and no commissions, times are tough – but it’s onwards and upwards (and upwards again) for the staff, as they go all out to win new contracts, deal with nightmare clients and fight to get their ambitious projects past the planners.

In the pilot episode, architects Sarah (Laura Solon) and Dan (Ben Willbond) contemplate escape from a malfunctioning multi-storey car park in Esher and the pure aesthetic of the open sandwich.

Series 1 finds Sir Lucien (Geoffrey Whitehead) trying to overcome his creative block by visiting a spa in Baden Baden – accompanied by reluctant colleague Tim (Alex Carter). Back at the practice, the other partners are juggling ambition, principles and scary Americans – and dreaming of taking minimalism to the max.